Yume Mienai: Pocket Version (Yume Mienai Pocket for short) is a Spanish fangame created by Annie-Mienai for Dream Diary Jam 3. It was developed in RPG Maker VX Ace and is based on an unreleased project: Yume Mienai: A Diary of a Blind Girl.

Yume Mienai: Pocket Version plays like a traditional fangame. The player enters the dream world by sleeping in the bed. The goal is to explore, collect effects and find pages of the main character's diary.

The game also includes battles, where the main character must defeat other characters to progress in the game. The player can save by interacting with the diary in the bedroom.

The player controls a teenage girl named Annie. Annie is a blind amnesiac who discovers that her diary's missing some pages. Home alone and cold due to the rain, she decides to sleep off her troubles. While dreaming she meets up with her friend Pon, who joins her on a quest to find the missing pages. 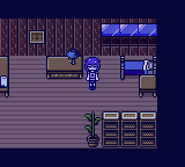 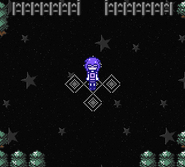