Yume Nikki Fangames Wiki
Register
Don't have an account?
Sign In
Advertisement
in: Fangames, Japanese Fangames, Fangames Made in RPG Maker 2000,
and 8 more

As of now, it's currently in version 0.035. The game features a girl named Yomika, who lives in a treehouse.

In Yomika's room there is a bookshelf with only two books, one blue and the other green. The blue book gives you access to a sound test. As you progress through the game, you can unlock more music on the sound test screen. The green book brings up the save menu.

By interacting with the pile of grass on the floor, Yomika will fall asleep and enter the dream world. In the dream world, she can find and obtain Effects that will allow her access to other areas or trigger certain Events. She can wake up anytime by pinching her cheek.

Considering her living conditions, this game most likely takes place at an earlier point in time as opposed to the modern rooms of the other fangames. Yomika herself seems to be in a sort of leaf skirt.

The game's motif appears to be mainly nature-based, with most of the Effects being traditional Japanese demons/outfits/creatures.

Yomika seems to be by herself in her treehouse, possibly because she lives in a forest isolating her from the rest of the world. She cannot leave due to the forest overgrowth, or that it is too dangerous to go outside. 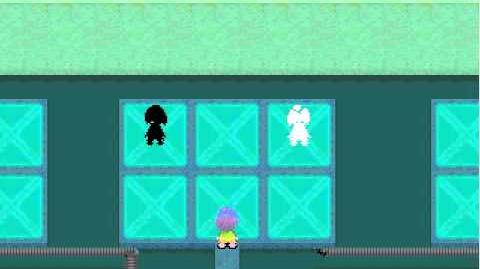