Yume Nikki Fangames Wiki
Register
Don't have an account?
Sign In
Advertisement
in: Fangames, Japanese Fangames, Fangames Made in RPG Maker 2000,
and 10 more

Yume 2kki (ゆめ2っき) (Yume Nikki, literally Dream Diary, but also a pun on the original game's title -- に, or "ni," means 2) is the original fangame that started it all. It is a large collaboration project from 2ch users and thus features a wide variety of worlds, effects, and ideas.

Just like the original game, there is no overarching plot and the only goal is to explore and collect all of the effects. Yume 2kki has a staggering 35 effects. Something unique about the game is the ability to mix effects, such as Bike + Wolf. Each of these effects have a particular use that can be found by traveling in the dream worlds.

The player can also collect and listen to the in-game music using the "Music" application on Urotsuki's computer, as well as menu themes which are scattered in the dream world in the form of eggs.

You play as a girl named Urotsuki. Due to the vast and many, many worlds of Yume 2kki, plus the four main endings (nine total endings), lots of theories have been made, and it is really up to the player on how they choose to interpret it. 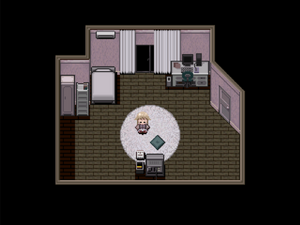 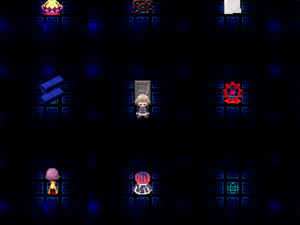 One of the variations of the Nexus' colours

Visit the Archive on the Yume 2kki Wiki to access older versions of the game.