Eun (pronounced similarly to "Un") is the protagonist of Hell Diary and a software developer for the Galwi technology conglomerate Delmun Corporation.

Has fair skin, dark blue hair and red eyes. In game wears a dark red button up jacket, black turtle neck underneath and a black skirt. She also has red shoes and dark grey stockings on.

As the protagonist, Eun herself does not speak much as the player decides her answers towards others, but she is usually shown to be quite kind and compassionate towards others.

Eun was born on 10 February, 1954 to a coal miner and a domestic servant in a mountain town in the country of Galwihanawe. She has a younger sister, Chun, born in 1957. Eun was raised poor and with help from the local clergy, who took her in as an acolyte as a young teenager.

In 1975, Eun moved to the capital city with her sister to find better work to help put Chun through the military academy. Eun was hired as a programmer for Delmun Corporation in 1976, and Chun graduated the academy the following year, when Hell Diary begins. She was a key developer for the DOS-like early OSes CCP/M (Consumer Control Program for Microcomputers) and ECP/M (Enterprise Control Program/Monitor). 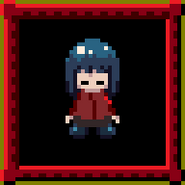 Retrieved from "https://yumenikkifg.fandom.com/wiki/Eun?oldid=56957"
Community content is available under CC-BY-SA unless otherwise noted.