Yume Nikki Fangames Wiki
Register
Don't have an account?
Sign In
Advertisement
in: Fangames, Japanese Fangames, Fangames Made in RPG Maker 2000,
and 8 more

De I Cide is a traditional Japanese Yume Nikki fangame with a twist made by Saki-Izuriha in RPG Maker 2000. This game features mostly dark and disturbing themes and has a rather unusual soundtrack, consisting of metal and trance tracks in contrast to calm piano music. It stars a girl with messy hair named Inahoozuki and a silver haired child named Ginmokusei. The latest version is Version SEVEN (VII).

Like most traditional fangames, the objective is to explore dream worlds and collect effects. There are six endings to find, three for each character. As Inahoozuki, the player can enter Inahoozuki's dreams through her bed and save at the notebook on her desk or through the menu.

Inahoozuki's Dream Room has a music player with the game's soundtrack, though most of the songs need to be unlocked first in order to be listened to. The most noticeable thing in her dream room is a Roomba. This isn't an effect, but rather serves as an alternative to riding a chair while dreaming. The TV can be turned on which'll show Japan's weather channel.

Interacting with the game console in front of the TV allows Inahoozuki to play a mini-game where the player controls a fast-moving bamboo shoot that has to smash small mushrooms to gain points, and avoid the colorful moving "chaser" mushrooms.

Starting from version TREY, De I Cide has two playable protagonists. Although both parts are independent from each other, it's recommended that new players play through Inahoozuki's part first. The player can switch to Ginmokusei at any time by interacting with the music box in Inahoozuki's dream room and vice versa.

Ginmokusei's apartment is quite different from Inahoozuki's, and prior to version SICE they could actually leave it and even use an elevator in their apartment building. Their dream worlds are different than Inahoozuki's, connected to a looping nexus with doors that move around and multiple effect-giving portals. The latter allows the player to collect specific effects that are correspondent to Inahoozuki's effects that the player's already collected.

A curious fact about this game is that it has a non-malicious-looking chaser. There is another type of recurring NPC, dark figures with a golden padlock who block the player's access to certain areas. There are 20 of them scattered around Inahoozuki's dream world and must be gotten rid of in order to see all the endings. Two of Ginmokusei's endings (ED5 and ED6) are unlocked by seeing ED3 and ED4 first.

Version CATER is extremely short, similar to the April Fool's releases of .flow, Me and other fangames in length, but not in tone. According to the creator, "CATER is neither a joke nor a kinda April Fool's event. That's actually a part and a close of the story."

You start off as Inahoozuki who, according to her description in later versions, is a Demon Child. Not only does she refuse to leave her room, she won't even go out to her balcony. Her room in reality is messy and bloody, contrasting from her dream room which is neat and tidy. Her appearance in Ver. CATER seems to reference the Poniko & Uboa event in Yume Nikki.

Similarly, Ginmokusei is also unable to leave their bedroom. Their bedroom is messy in reality and dilapidated in the dream world. Both characters seem to be connected to each other in some way. 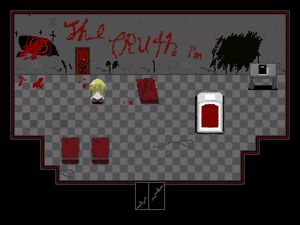 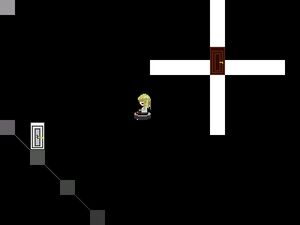