Yume Nikki Fangames Wiki
Register
Don't have an account?
Sign In
Advertisement
in: Fangames, Translated To Chinese, Translated To Spanish,
and 5 more

Broken Bottles is an English Yume Nikki Fangame created by Doodle in RPG Maker 2003. You play as a young girl named Dokutsuki who explores her subconscious through a chemistry set. Glass and bottles appear in various forms as an artistic motif: seen in maps, doorways, effects, etc. (chemical tubes could also be seen as "bottles").

Broken Bottles plays like most Yume Nikki fangames, with the main goal being collecting effects and exploring Dokutsuki's dream world. Something a bit different from other fangames is the inclusion of dialogue and items used to solve certain puzzles or access new areas. The atmosphere is hard to decipher but seems to be dark (dark in a way further from .flow or Me, but closer to Yume Graffiti's moods). Some possible motifs/themes are science, glass, drugs and their side effects, forgetting, ect.

"It holds the same main idea as Yume Nikki, you explore a girl's subconscious by falling into an induced sleep and you find what may lie in her mind. You start out in a corridor of doors, pick the one you want to start in while you explore. The effects change what the character looks like and sometimes their abilities. If you equip the same effect twice, you will return to your normal self. Just wander around and enjoy." (Source)

Not much is known about the plot so far, but it is possible that someone in Dokutsuki's family (Possibly her father due to the writing of "Dad..." in the writing/face world) has abused or hurt Dokutsuki in some way. The residents of her dream world seem to have their own problems which could be her subconscious memories (A NPC mentioned her forgetting about him). She also seems to have a bad past with a childhood friend of hers, as some areas and events show her with a pink haired girl. 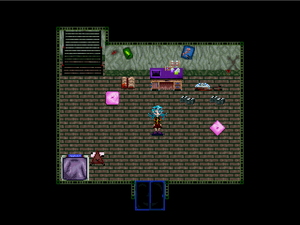 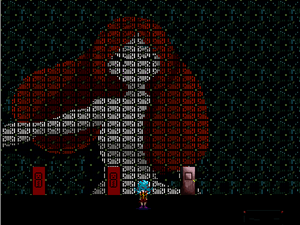 The game requires use of the fan-translated RPG Maker 2003 RTP, and will crash on startup or in certain areas without it. Copying the following files into the game should fix any errors: