There is also a prayers page on the Answered Prayers Wiki. 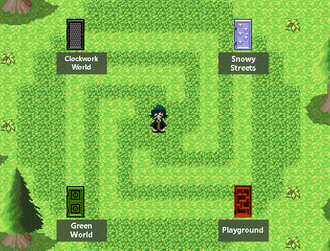 Passive Effect: Some of the NPCs will run or back away. Some animated characters will animate faster.

Action: (Shift) Fluorette switches the shovel placement, either to her shoulder or holding it outward.

Enter the Clockwork World. Make your way right and down from the door and reach the large gray area. Enter the door in the middle of this area to the Industrial Maze. From the entrance go: right, up, right, down and right. This will bring you to a room with a shovel in it that will give you the effect.

Appearance: Fluorette looks like a small blue furry ball with cat ears. Her hair and shoes are kept the way they were before.

Enter the Clockwork World. Make your way right and down from the entrance to a large gray area. Enter the door in the middle of this area into the Industrial Maze. From the entrance go: left, up, left, down twice then left. Interact with the gameboy which will bring you to Game Boy World.

Leave the house you're in and enter the smaller house above you. Go down the stairs then go all the way right past the pyramid. You will now be in a large house. Go up the stairs until you reach a room with a Koraiyn in it. Interact with it go get the effect.

Action: (Shift) Fluorette leaves the location by changing own form.

Practical Uses: This effect allows Fluorette return to the Nexus at will.

Appearance: Fluorette carries a large submarine sandwich with what seems to be a variety of salad, cheese and meat, and a tomato on a toothpick.

Action: (Shift) Fluorette takes a bite out of the sandwich. The onomatopoeia nom! floats up in green letters.

Enter the Clockwork World. Go down and right from the entrance to a large gray area. Enter the door you see to the Industrial Maze. Go: Left, Up and Left. Use the Rusty Key on the brown door. Interact with the sandwich in the room you enter.

Practical Uses: Dark areas such as the Black Caves are easily navigable.

Enter the Playground. Go left until you reach a dark gray door. Enter it into the Dark Maze. Navigate your way to the blinking lights and interact with them.

Enter the Green World. Head south-east from the entrance until you find a glitched portal. Interact with the static portal to reach Glitch World. Go right and down from where you're teleported.

Appearance: Fluorette has a white-blue, luminescent halo floating above her head.

Appearance: Fluorette's lower body from the head on is replaced by dark tentacles.

Enter the Playground. Go left from the entrance and enter the building near where the phantom NPC is. Hit the red button to go down to the Underwater Ship. Go left, at the first crossway, go up and go left again. In the narrow path just go left and enter the door. Interact with the NPC inside the room and it'll disappear. Leave the room and go down the path you went past.

Go down until you reach a room where the floor pattern is similar to the nexus's. Enter the door on the right and interact with the NPC. You will be sent to the Ocean Floor. Go up and find/interact with the light blue jellyfish.

Wearing them gives you a boost.

Practical Uses: Can be used to travel through the dream world a lot faster.

Enter the Green World. Go right from the door until you reach a static green NPC. Go down from where they are until you see a pair of sandals surrounded by flowers. Interact with the sandals.

Appearance: Fluorette turns into a karakasa. She gains an umbrella over her head, one of her eyes turn red, and her tongue hangs out to the middle point of her body. She moves forward by hopping on a single leg.

Enter the Snowy Streets. Go right from the door and interact with the burning incinerator. In the alternate snow area, go left onto the patch of snow then go south from the incinerator and go between two green trees that are beside each other. Go right a little bit and up from the snowy trees. Enter the door and you'll now be in the Miko Shrine.

Take the path to the left in the shrine. Interact with the red Karakasa and you'll obtain the effect.

Take away the color.

Action: (Shift) Screen flashes white and the colour in the area becomes monochrome for a couple of seconds.

Leave the temple and make your way to the city. In the city, go right then take the path going down. Cross the bridge then go left and down to the forest. Interact with the NPC in front of the well.

Action: (Shift) Fluorette strums her guitar. She can play up to four different chords.

Getting the Rusty Key[]

The Rusty Key can be found in the Underwater Ship. Make your way to the room with the floor pattern that looks like the Nexus (see Tentacles effect guide). Go down where the floor is glass and you can see water. Go right and up a narrow pathway which will lead you to a broken window.

Enter the broken window. Go up and interact with the key to obtain it.

Using the Shovel effect, you can kill the spirit that gives you the Monochrome effect. Doing so will cause the screen to darken and some skinny chasers will move towards you. You won't be able to go back the way you came. When you're caught you will teleported to a monochrome version of the real world.

You will not be able to use your effects, however you can leave the shrine. As you walk away from the shrine, the background will become dark. At the end of the path is another Fluorette with a shovel. Interacting with her will cause her to attack you. After that you'll wake up in the real shrine.

Hit one of the ChiMiko's in the Miko Shrine with your Shovel then go back to the Ice Lake. A hostile chaser will appear and catch you. This chaser is very fast and you cannot outrun them. When caught you will be stuck in a room and can only leave by either waking up or using the Phantom effect.

Spirit in the Nexus[]

After collecting all the effects, there will be a spirit standing near the shrine's entrance the next time you enter the spirit world. Interacting with the spirit will cause the screen to fade and the word LEAVE will pop up on the screen. The spirit will disappear afterwards and won't re-appear.

Creature in the Underwater Ship[]

Note: This event will not activate if the Rusty Key is still in your inventory.

After you use the Rusty Key on the rusted door in the Industrial Maze, return to the Underwater Ship's dark room where you originally found the key. A creature (visible only by its gigantic cat-like eyes) will appear upon entering and will rush you. The screen then goes black and you're kicked out of the spirit world.