Amnesia is a traditional Japanese fangame, made by fukuno04 in WOLF RPG Editor, with a RPG Maker 2000/2003 feel. The protagonist is a ghost named Toritsuki.

In Amnesia, the main goals are collecting effects and viewing events to try and piece together Toritsuki's past, and how/why she died. There are several NPCs and events that seem to give hints on Toritsuki's life before the game. Unlike most Yume Nikki fangames, effects can be used in Toritsuki's room, as the whole world is her dream world/afterlife.

The nexus is instantly accessible by leaving Toritsuki's bedroom. Interacting with the desk in the bedroom allows the player to save. There is also a minigame, NEZU, that can be played on a handheld console in the bedroom.

Toritsuki is a ghost girl stuck in her room, seemingly unable to move on. While the circumstances of her death are not shown, several events and areas suggest that she died by suicide. 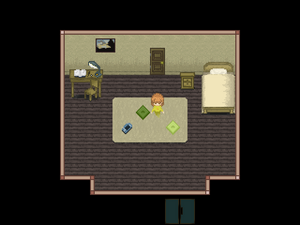 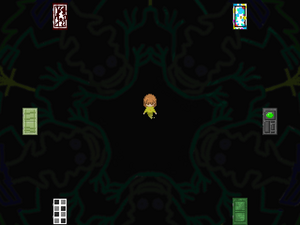